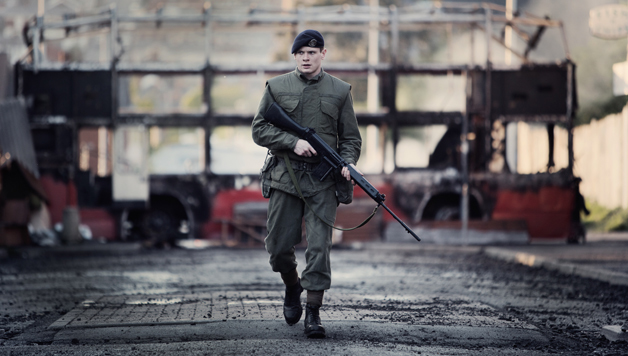 "Take it and give it back" is the shout in the boxing match that opens this strikingly accomplished film. It could serve ably as both précis of — and motto for — the combustible situation these young soldiers are about to ignorantly walk into: Belfast, 1971. A city divided largely along Protestant and Catholic lines — the Loyalists who want Northern Ireland to remain part of the UK, and the Republicans who want it to join Eire — Belfast is a kitchen-sink war zone.

This is a tribal situation the British Army are portrayed as blundering into, with elements both nefarious and naive. While a unit of undercover soldiers are clearly up to some Bad Stuff, the regular army is dodging it on the street — literally, as locals fling faeces at the unwelcome “Brits”. More bewildered than he is belligerent, Gary is our avatar, left behind thanks to the panic of his inexperienced commanding officer.

Wounded and scared and largely silent, he struggles through the streets in a performance that’s wonderfully watchable. This points to an element some might find uncomfortable: ’71 is, in some ways, a popcorn thriller about a community in tragedy. But however exciting the set-pieces, the film retains its integrity. The violence is seen, shockingly, and felt — from bomb to blade. This film puts you right there without political grandstanding, its glancing blows have a lasting impact. ’71 is one of the best films of ’14.