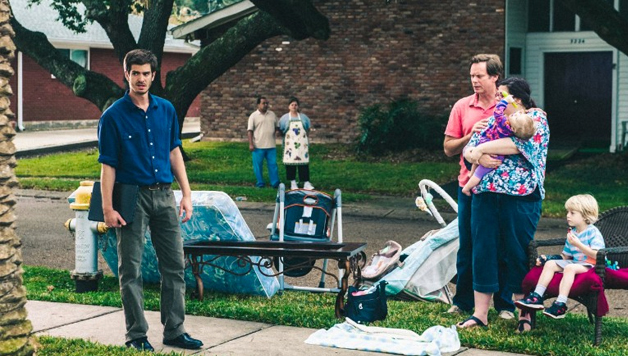 Ramin Bahrani, an American-born director of Iranian descent, gives us a superb and wrenching thriller about a man who loses his soul while trying to save it. It's a profound film about American lives in the 21st century, dominated by two towering performances.

Rick Carver, a Florida real estate agent who specialises in foreclosures. He has a pistol in an ankle holster and a thorough knowledge of the law. The cops who back him up at each foreclosure call him "the boss" because he's direct, unflappable and cold as ice. He has seen it all in the years since the sub-prime loan debacle began in 2008. He deals in hundreds of houses, and the personal tragedy of the owners is not his concern.

Dennis Nash, his next victim, a jack-of-all-trades builder, has been laid off by the housing slump. Rick and his team enforce the foreclosure, in a scene of grinding tension. By the end, Dennis stands on the side walk with his mother Lynn and young son Connor, their belongings stacked beside them in a pathetic pile. He can only carry so much in his pick-up; the rest will probably be stolen before he can store it and he must get his family home back. Dennis would like to kill Rick Carver, but Carver offers him cash to clean up a house where the tenants sabotaged the sewer pipes before they left.

99 Homes is marked by a strongly humanist sense of justice and a great fearlessness besides. The rackets and scams it exposes are all real, the result of extensive research. It’s a gripping thriller with good guys and bad guys, but everyone is a victim, even Rick Carver.