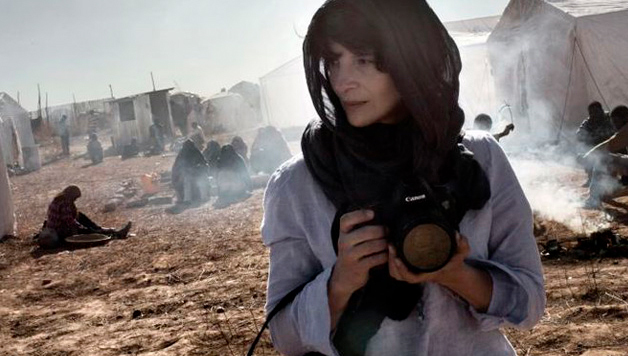 (Tusen ganger god natt) Mature themes, violence and infrequent coarse language Norway, Ireland, Sweden 2014 Directed by: Erik Poppe Featuring: Juliette Binoche, Nikolaj Coster-Waldau, Maria Doyle Kennedy, Lauryn Canny, Chloe Annett Language: Norwegian, English Running time: 117 minutes Juliette Binoche stars as a warzone photojournalist in a film that sits somewhere between drama and statement. The film opens in unsettling fashion, as Binoche's character, Rebecca, photographs the preparations of a female suicide bomber, then follows her to her destination. Rebecca specialises in photographing combat zones and is torn between devotion to her work and to her two daughters and her husband, an awkwardly drawn dour character. He is increasingly frustrated by the risks she takes and, under pressure from him, she decides to step away from her work. She has no obvious plan for what she might do apart from spend more time with her daughters; one of primary school age and the other one a teenager. Inevitably, of course, she's drawn back into the fray. We get a brief sense of context, of the reception of Rebecca's work, of the way media organisations use and present it, and of the politics of journalism. Poppe registers Rebecca's moral commitment and the compulsive aspect of her dedication. The film oscillates between drama and statement and it becomes a series of set-pieces and what-ifs. Original review: Phillipa Hawker - Sydney Morning Herald Extracted & Compiled by: Kim Pridham