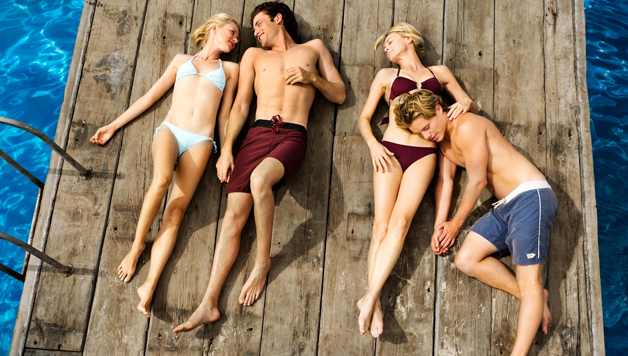 The Australian coast is the setting for ADORATION, adapted from a short story, 'The Grandmothers', by Doris Lessing. Naomi Watts and Robin Wright star as two close friends, neighbours Lil and Ros.

The film begins with the death of Lil's husband, and Ros' husband is soon away to a job in the city. Ros is reluctant to join him, partly because her life is so idyllic, but also because she has begun an affair with Lil's son Ian – Xavier Samuel. Partly as a response to his mother's infidelity Tom, Ros' son – James Frecheville - begins an affair with Lil. Everything is acknowledged between the four, it is still idyllic.

The refreshing thing about ADORATION is the lack of morality imposed on these quite unconventional couplings. Anne Fontaine has succeeded in accessing the emotional truth of her story, with all the joy and pain that these relationships bring. Stunning performances by both Naomi Watts and Robin Wright - both such wonderfully beautiful women - anchor the film, with Xavier Samuel heart-wrenchingly effective as Ian and James Frecheville also good as Tom.

This film resonates with the coastal landscape of New South Wales, the cinematography by Christophe Beaucarne is sublime. I loved it, but there is no doubting that it is one that will provoke discussion.