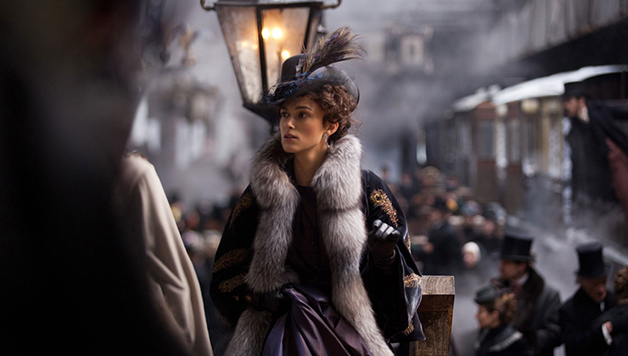 Leo Tolstoy's famously vast novel has of course been whittled down, so that everything that happens on screen elucidates the central theme of infidelity and whether it is an impulse "of the animal or the soul". By the time Anna dives into the arms of besotted military officer Count Vronsky, desire and repercussion has been examined from every angle, and we feel for both the lovers and Anna's betrayed, dispassionate husband, Karenin. It's also still a tale of two cities (St Petersburg and Moscow, and the country, with their contrasting characters and morality.

It's easy to conclude that this Anna Karenina is a superficial portrait of a superficial society, but that would be to dismiss how emotionally powerful it is in key moments, particularly an intricately choreographed society scene that communicates the oppressiveness of gossip.

It's kind of extraordinary to read that the whole worldwithin- a-theatre idea only came 12 weeks before the shoot, because it's a striking marriage of theme and methodology. This is an Anna Karenina full of risks. It's a melodrama with the zippy editing of a Guy Ritchie film, the Gallic filigree of Jean-Pierre Jeunet, and, above all, the flourish and symbolism of a work of theatre. In fact, pretty much the whole film has been transplanted to within the confines of a theatre, a conceit that brilliantly suggests a society ruled by pretence and observation. In this world, society balls play out on stage, affairs unfold within the wings, and when a character visits the poorer part of town, he climbs three storeys into the shaky rafters. When the St Petersburg elite watch a piece of theatre, the curtain lifts on the next scene in their lives.