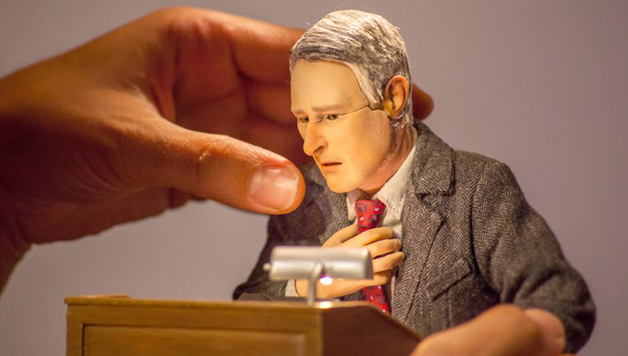 The hell of other people fuses with the hell of loneliness in this strange miniature masterpiece. It’s an eerily detailed puppet animation about a motivational speaker who spends one unhappy night in a Cincinnati hotel. It is really funny, and incidentally boasts one of the most extraordinarily real sex scenes in film history. It also scared me the way a top-notch horror or a sci-fi dystopia might. Being amused or scared at Anomalisa feels like choosing between the blue pill or the red pill in The Matrix.

Is it about a man having a midlife breakdown? Or is this the breakdown itself? Is this film just one long hallucinatory symptom of cognitive disorder? Michael Stone, an expatriate Brit in the US who has made a name and career for himself writing motivational books about customer service. He’s in Cincinnati to give a speech on this subject. But far from being a dynamic or charismatic individual, he is clinically depressed: small, cowed, numbed and alienated from the world.

This is partly because Cincinnati has bad and guilty memories for him. It was here that, 10 years before, Michael broke up with his long-term girlfriend Bella in a spasm of commitment-phobic panic he still can’t explain to himself, and he wonders if he ought to call her up for a drink while he’s in town to apologise. His self-doubt and self-hate extend to his current relationship (he is married with a son) and to relationships in general. He has booked into the Fregoli hotel, (a clue to the Fregoli delusion, a rare condition in which different people can appear as the same person). There he has an intense encounter with a besotted fan; a call-centre worker called Lisa. They have a conversation about the word “anomaly” and how it applies in an illusory way to all of us. Everyone thinks they are anomalous; different from everyone else and special. Michael nicknames Lisa “Anomalisa”. Is this a cruel if unintentional joke at her expense? Michael is getting a sudden sense of horrified perspective: all human beings are creepily the same, with these faces in exactly the same configuration, the eyes, the nose, the mouth bunched together on one side of the head. They’re all the same. Maybe sex will stave off this horror, and maybe not.