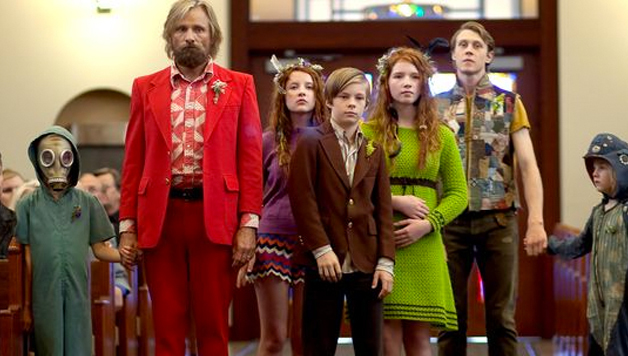 In an isolated stretch of forest somewhere in Washington State, Ben Cash and his wife Leslie have been raising their six children far from the modern world, home-schooling them in an ec-centric curriculum that includes M-theory, Marxism and martial arts. With Leslie away in the hospital for the last few months with what turns out to be bi-polar disorder, it’s left to Ben to keep the kids busy with lessons in deer-hunting with knives, jamming with home made instru-ments and solo rock climbing, amongst other topics.

Suddenly, the family receives a shock. Leslie has killed herself. Determined to ensure Leslie is cremated rather than buried to honour her last will and testament, Ben decides to take the kids on the obligatory road trip across the country to New Mexico in a hacked school bus-cum-library-cum-camper van named Steve. When they need food, he teaches them to shoplift (“Op-eration Liberate the Food!”). The children goggle in amazement at the materialism and waste-fulness of contemporary American culture, and realise how different they are from their peers. At the home of Ben’s generally supportive sister, Harper, the Cash kids are mostly sneered at by their two teenage cousins, who are constantly fiddling with their phones etc. But when Harper dares to challenge Ben’s parenting methods, he uses Zaja’s knowledge of the Bill of Rights to demonstrate the superiority of his pedagogical program.

This is really a movie for upper-middle class hipsters who once fancied themselves firebrands and status quo-challengers in college, but now consider only buying organic food at Whole Foods and not vaccinating their kids to be radical acts.