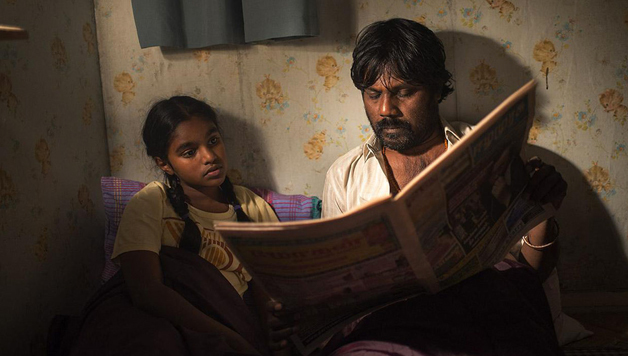 Dheepan is a Tamil fighter facing impending defeat when he seeks to escape Sri Lanka for France. At a resettlement outpost, he recruits Yalini to play his wife for the purposes of making a stronger case for political asylum. She, in turn, plucks a young girl named Illayaal to play their child. In a superb sequence of visual storytelling, Audiard transports the improvised family to Paris, where Dheepan initially sells trinkets on the streets, until he and his new family relocate to one of several suburban apartment blocks — known as banlieues — that have become selfcontained communities for generations of French immigrants.

With warmth and touches of welcome humour, Audiard gracefully captures the strangeness, forced intimacy and growing affection of the arrangement between Dheepan, Yalini and Illayaal, as they navigate alien cultures both within and outside the walls of their new home. While Illayaal struggles to fit in at school, Yalini constantly threatens to leave to join family in London. Meanwhile, Dheepan — employed as a caretaker of the apartment complex — grows increasingly wary of the gang violence that threatens to engulf the neighbourhood and his own fragile future, his foreboding finally leading him to reclaim his identity as a ruthless soldier.

Fans of Audiard’s masterful crime drama “A Prophet,” as well as the subsequent “Rust and Bone,” will recognize his superb skills at work in a film that conveys enormous, heartbreaking emotion without resorting to sentimentalism or cheap manipulations. Working instinctively with his cast of unknowns, the filmmaker displays the same competing impulses that animate so much of his work: On one hand, Audiard evinces the sensitive, watchful soul of a philosopher and artist, on the other he indulges the less elegant, more pulpy, sensibilities of a seasoned genre director.