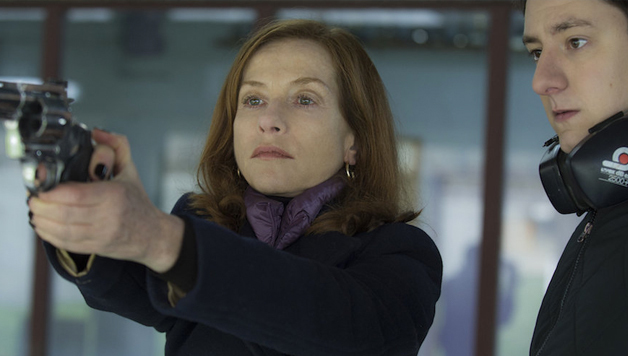 This film is about an outrage. Maybe it is an outrage. It has invented a new genre: the rape-revenge black comedy, and it could not possibly have existed without Isabelle Huppert. She is the only star capable of carrying this off, the only actor with sufficient hauteur to reassure you that all of the film’s provocations are 100% intentional.

Preposterous could be this film’s middle name … or one of them, along with gripping, mind-boggling and hilarious. It is a bulging package of twists, ironies and jaw-slackeningly scandalous moments. Screenwriter and genre veteran David Birke has adapted the award-winning novel Oh… by French author Philippe Djian, which came out in 2012. But the action of the film could be taking place really at any time in the last 20, 30 or even 40 years.

Huppert plays the divorced and wonderfully elegant Michèle, who has a wide circle of family and friends and is the rather unlikely co-founder and co-director of a highly successful video game company in Paris. She has no problem with her violent games objectifying women.

One afternoon, Michèle is raped in her house by a masked attacker. She is reluctant to call the police because she happens to be the daughter of a notorious imprisoned serial killer, to whose horrors she was an intimate witness as a little girl, and for which the tabloids imply she bears some complicit guilt. She is used to casual hatred but realises that a publicised rape case will only reawaken the abuse.

So she has apparently no choice but to treat the rape with a Huppertian moue of dismissal. But she has her suspicions as to who the culprit is, and there may still be a chance of luring her attacker into the open with an ambiguous cat-and-mouse game Elle is an utterly arresting and extraordinarily strange film, and Huppert’s magnificent performance glazes everything with mystery and is an essential flavour for its dark and sulphurous absurdity.