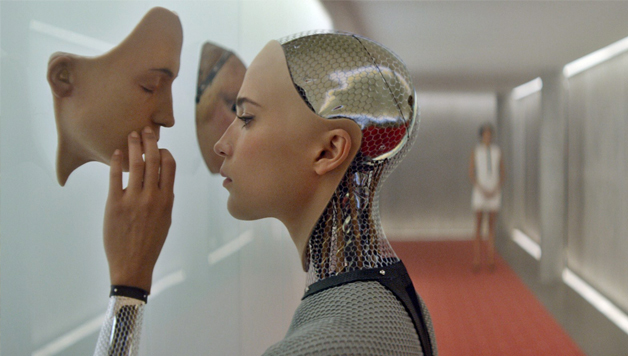 Ex Machina immediately enters the running for the best science fiction film of the year just by following through on the promise of its concept. It knows what it wants to tell us, and frankly we’ve heard it before. But it flashes some terrific little variations on the expected formula, along with shades of real darkness that assures you it’s playing for keeps.

At its crux, stands the world’s first functional artificial intelligence created by a maverick genius who has devoted the resources of his gigantic software company into her creation. He’s been laboring over her in complete solitude for months, but now he has to put her to the test: can she convince another person that she is more than just pre-arranged responses? So he ferries in one of his brighter employees for a week of thorough testing to see what happens.

Naturally, nothing goes the way anyone intended, and naturally Ava has more up her silicon sleeve than her male overseers suspect. Director Alex Garland cloaks her machinations, and the ensuing suspense, in the film’s bigger question: does having a soul mean that this construct is human? Or is it something entirely new, something that (naturally) we may not be able to control as well as we like?
The real kick is that neither of these male geek icons stops to think about how Ava might have her own ideas. They both project what they want onto her: creating in their minds a pleasing image of her, rather than trying to understand what she really is.

Add to that some exquisite technical details (creating suspense out of silence and tension around the unspoken) and a quiet bit of special effects wizardry (Ava displays a brilliant bit of concept design), and Ex Machina turns into the kind of film that science fiction fans pray for.