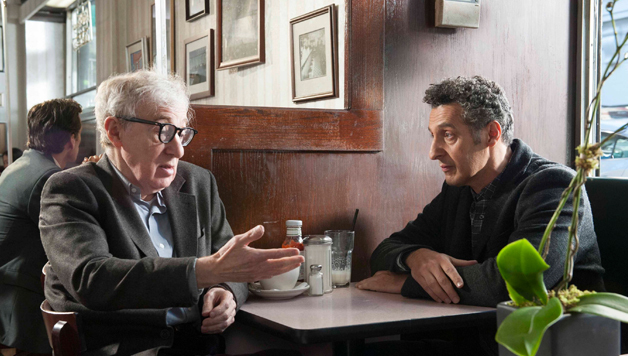 Fioravante decides to become a professional Don Juan as a way of making money to help his cash strapped friend, Murray. With Murray acting as his “Manager”, the duo quickly find themselves caught up in the crosscurrents of love and money.

It is not often you see Woody Allen appearing in other people’s films but he willingly takes on the role of an aging pimp in Fading Gigolo. It happens like this: Murray is closing up his failing New York bookshop in the company of his friend Fioravante when he mentions that his dermatologist, Dr Parker, is interested in a sexual ménage a trois with her friend Selima. Murray has recommended Fioravante for the job at a cost of $1000. Fioravante is dumbfounded but is talked into going along with the lucrative adventure. And then Murray meets repressed, shy Avigal – a widow in the Hassidic community and decides she could do with some of Fioravante’s ministrations too. Her would-be suitor, Hassidic policeman Dovi however begins to notice changes in Avigal. This most unlikely premise has been handled with such aplomb by Turturro that you are really charmed by the film and everyone in it. Woody Allen is very much his old self in this. Turturro shines as the shy Lothario while the women are just gorgeous in their varying ways, Also it gives insight into a community that doesn’t often get represented on screen. Turturro made a number of films but in many ways this is his most accessible and enjoyable.