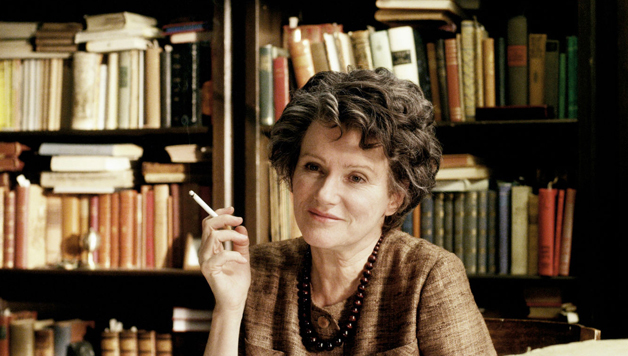 Adolf Eichmann is captured by Israeli secret agents and taken to Jerusalem to be tried for war crimes. New York based Jewish philosophy professor and political theorist Hannah Arendt (Barbara Sukowa) offers to go and cover the trial for The New Yorker. After she attends Eichmann's trial in 1961, Arendt dares to write about the Holocaust in terms no one had ever done before, putting forward the shallow mediocrity of the man as an example of the banality of evil. Eichmann struck Arendt as a shallow nobody. Arendt was critical of the way that some Jewish leaders acted during the Holocaust and that brought the wrath of the Jewish down on her.

Her work deeply disturbs her best friend Hans Jonas and instantly provokes a scandal, but Arendt stands strong as she is attacked by friends and foes alike. The publication of her article in The New Yorker provokes an immediate scandal in the U.S., Israel, and soon in the rest of the world.

In the film's most important scene near the end where she addresses her University class to argue her theory about totalitarianism creating a moral shift in the whole population that distorts normal choices and decisions, Barbara Sukowa displays her complete comprehension of the Arendt character and the things that drove her.

Arendt is portrayed lying on a lounge, a cigarette burning between fingers, eyes closed. Von Trotta uses the most accessible imagery to portray her as a thinker. It is as a piece of drama about the human condition that this film needs to be assessed, and on that score - with a few quibbles about structure and flashbacks and occasional lack of clarity - it is successful, in its own rigorous way.