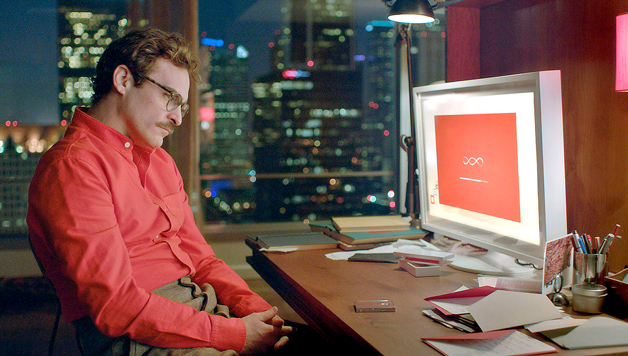 Theodore Twombly has been through a marriage break-up and wonders about exploring computer dating. Encouraged by friends, he meets a woman and on a single date they manage the whole cycle; meeting, drinking, befriending, flirting, getting off, arguing and breaking up. When he won’t commit, she switches from enthusiasm to vitriol and accuses him of being “creepy”. This introduces one of the key themes of the film that the instant intimacy of social media and online dating is making us all “creepy”.

Theodore learns about a new computer operating system offering an intuitive virtual companion, he buys one and donning the earpiece and camera changes his life. His operating system is called Samantha and is immediately curious about every aspect of Theodore’s life. She (as it has a female persona) appears to crave intimacy as much as he does. This part of the film seems breathtakingly authentic and depicts how different internet interaction is from more traditional forms of human discourse. ‘Samantha’ is not portrayed as an artificial intelligence but as a breathily fascinating fantasy partner-in-life. Certainly when you hear her, you are expected to want one too.

Theodore is soon enraptured by her as she seems to want to gorge on real human experiences. Virtual sex isn’t enough for her, so she finds a sympathetic real woman to act as her physical avatar. This unsettles Theodore and he withdraws from Samantha, but not for long.

Her is an unapologetic modern love story, where one half of the couple is invisible and unreal in the true sense.