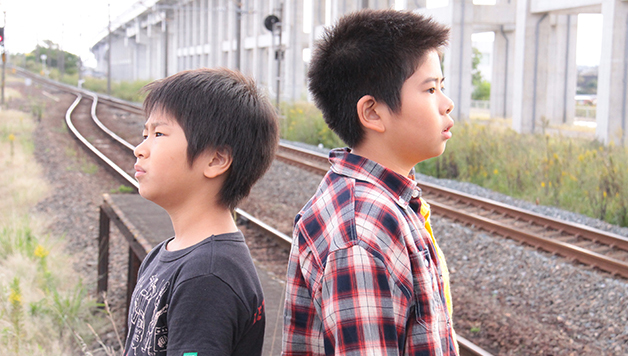 Mild themes & infrequent coarse language Japan 2011 Director:Hirokazu Koreeda Featuring:Koki Maeda,Ohshiro Maeda,Ryoga Hayashi Language:Japanese with subtitles Running Time:128 minutes Two brothers— sixth-grader Koichi and fourth-grader Ryunosuke — both live in Kyushu, but are separated by their parent's divorce. Koichi lives grumpily with his working mom , Japanese-sweetsmaking grandfather and hula-danceloving grandmother in Kagoshima. He doesn't much care for the gritty ash from the nearby volcano or even the blandish sweets that granddad turns out.In fact,he wishes the volcano would wipe the whole place off the map — and that Mom and Dad could get back together. The perpetually chipper Ryunosuke is rather enjoying life with his laid-back musician father in Fukuoka. Dad's band-mates are cool (even if their CDs don't sell), and the prettiest girl in Ryunosuke's class, Emi,likes him, though their "romance" consists of hanging out with her and her girlfriends. But he seconds his brother's wish, while remembering little more from family life than constant bickering between his parents. Then Koichi hears a rumor that when the new bullet trains first pass each other — one coming from Hakata in the north and anther from Kagoshima in the south — the energy they generate will cause wishes to come true. There's just one catch: Wishers have to be there on the spot when the trains pass. Koichi calls up Ryunosuke on his cellphone and proposes a plan: They meet at a midway point and, by combining their wishes, better guarantee a happy outcome — that is, a family reunion. Rather than meandering, the film is immersed in a magical time that sometimes moves at the speed of a bullet train and sometimes passes very slowly. Original review by Mark Schilling-The Japan Times and Dedorah Young-The Hollywood Reporter Extracted & compiled by Janez Zagoda
Tap this button and choose "Add to Home Screen" to add Launceston Film Society to your home screen!
Tap this button and choose "Add to Home screen" to add Launceston Film Society to your home screen!