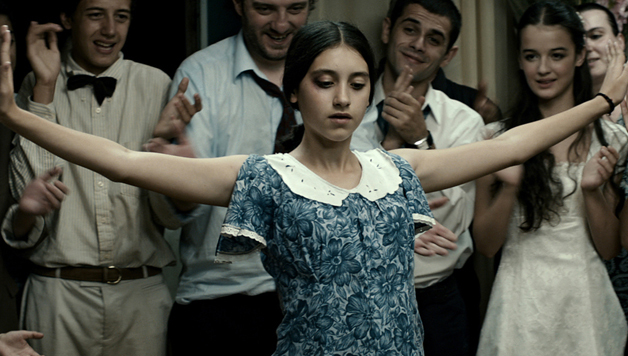 Mature themes, coarse language and violence Georgia/Germany/France 2013 Directors: Nana Ekvtimishvili, Simon Groß Featuring: Lika Babluani, Mariam Bokeria, Zurab Gogaladze, Data Zakareishvili, Zurab Gogaladze, Ana Nijaradze, Maiko Ninua, Tamar Bukhnikashvili, Temiko Chichinadze, Berta Khapava Language: Georgian with subtitles Running time: 102 minutes Set in the early nineties in the decaying suburbs of Tbilisi (capital of the then newly independent Georgia), the violent bread queues are a form of civil war and typify the uneasy struggle of existence in that city. At home, loud family rows are commonplace and provide the most traumatising scenes in the film. In the cocoon of their friendship, 14 year old Eka and Natia find some harmony. However eventual conflict occurs over a boy, Lado, who is a tall, handsome, sophisticated young man and clearly interested in Natia. So is the unsophisticated, thuggish Kote, who sets off a chain of events when he and his friends kidnap Natia. Although Natia is keen on Lado, she submits to being named Kote's bride. The films focus is on the characters and their interactions, many scenes are shot as close ups of the young faces. Sometimes this is at the expense of the context of a scene. The story meanders and while we understand what is happening, the lack of visual evidence for it can be unsatisfying. Lado gives Natia a pistol to protect herself, but he only has one bullet and while he promises more, they never eventuate. The pistol isn't really for shooting people, it becomes a symbol of power. It passes between the girls and is the cause of friction particularly when tragedy, inevitably, overtakes them. Original Review: Andrew Urban - Urbancinefile Extracted by Kim Pridham