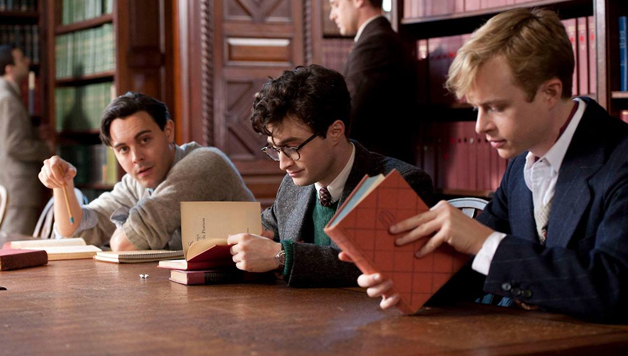 Winning a place to study classics at Columbia University in 1943 leads poet Allen Ginsberg into a destructive social scene. With fellow students Jack Kerouac and William Burroughs, Ginsberg is soon involved with David Kammerer and the charismatic Lucien Carr. It is a heady period in these young men’s rites of passage into adulthood when despite the war going on in Europe they could indulge in whatever extreme pleasure they wanted to. For the wealthy Burroughs it was an endless stream of drugs and he coasted through it perpetually stoned. Ginsberg could finally shed the responsibility of the demands of his mentally ill mother, nurture his writing and explore his sexuality Carr is a blue-eyed, blonde-haired paramour whose hapless devotees will do anything to please him. Despite Carr constantly quoting Yeats he relied on Kammerer to actually write his essays. The outrageous antics of the group were designed to shock the establishment. New words, new rhythms and new visions follow. “The New Vision” is the name they adopt to describe the wave of creativity they are generating.

Whilst the movie is ostensibly about the murder and subsequent trial (It is a true story and Kerouac, Burroughs and Carr all became murder suspects) it is more about how this bunch of friends gelled together and set them on course for what lay ahead and would earn them the label “The Beat Generation”

In the lead, Radcliffe’s performance of transformation, not just of Ginsberg, but for the actor himself, is brilliant. He not only shakes off Harry Potter but also all his clothes to show that he can convincingly make out with another man.