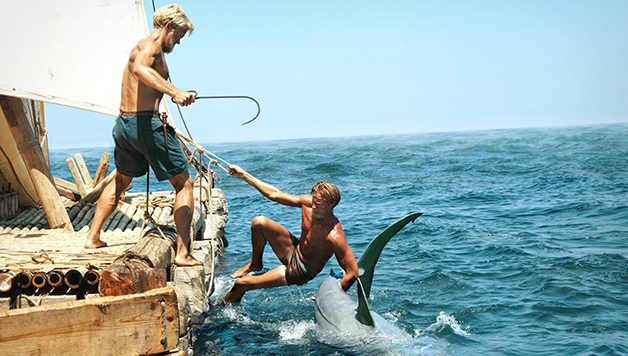 Heyerdahl was a zoologist who, on a visit to French Polynesia, theorized that the islanders’ ancient legend about the sun god Kon-Tiki arriving from the east was true. Noting that a pineapple said to be indigenous to South America grew in Polynesia, he became convinced that Peruvians had settled the islands. Except the Peruvians had no boats — just balsa-wood rafts.

Together with five like-minded souls with more courage than sense, Heyerdahl set sail in 1947 from Peru upon a raft built only with materials that would have been available 1,500 years prior. In the most thrilling sequence of this consistently rousing oldschool adventure, Heyerdahl grabs a passing shark with his bare hands, thrusts a hook into it, drags it aboard and guts it with a knife.

“Kon-Tiki,” which shares a title with Heyerdahl’s own Oscarwinning 1950 documentary about the voyage, was shot simultaneously in both Norwegian and English.. It’s a terrifically engaging throwback to the uplifting, ironyfree, outdoorsy ’60s Disney yarns from which we kids would emerge begging our parents for a chance to go get shipwrecked or to trek across the Arctic. In reality, none of us could have survived 72 hours in the wild unless lifesaving quantities of television and Cheetos had been airlifted in.