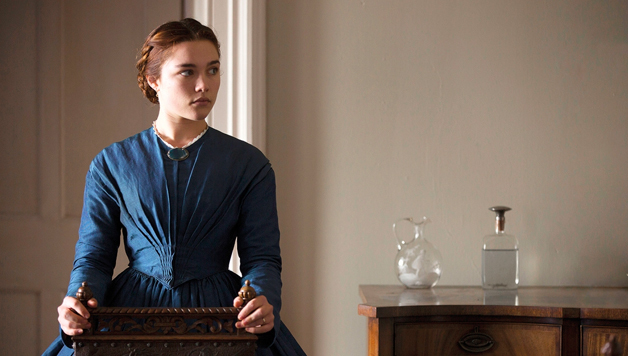 Trapped in a loveless, sexless marriage to an older man, and bound by the confines of their draughty moorland home, Katherine has no occupation for her days except to dress and undress. Each morning and evening her maid Anna assists with the rigmarole of crinolines and hair-pinning, and at night her husband Alexander’s physical interest in her begins and ends with demanding she remove her nightdress – leaving her to shiver alone. As Anna tightens Katherine’s corset and scrapes a brush through her tangled hair.

Left alone when the men travel on business, Katherine takes increasingly less care over appearances, until the whole county knows that she is sleeping with a groom, Sebastian – their repeated, urgent sexual encounters rarely allowing any time to disrobe. Katherine’s audacious response is not to cover her shame, but to kill those who could expose her or thwart her ambition to be the mistress of herself, and the household. When the lovers first meet, Anna is naked and being weighed like a pig by a circle of taunting men. It’s clear that Katherine craves blood as much as sex: her teeth crunch on Sebastian’s knuckle before she succumbs to him; she insists on kissing his seeping wounds.

It is eventually revealed that the tidy, symmetrical spaces of the house aren’t oppressing Katherine at all: with her neat, heart-shaped face, centre-parted hair and stiff bearing, she matches its formality, to the manor born. While Katherine and her ill-fated in-laws are white, Anna is black, as is Alexander’s young ward Teddy, who threatens Katherine’s inheritance. Sebastian, beneath a face smeared with muck, has brown skin. As Katherine bloodily rebels against her own conjugal oppression, being a chattel bought, as Alexander says, “along with a piece of land not fit enough to graze a cow on”, she exploits and victimises those below her on the social ladder: non-white, poor, illegitimate.