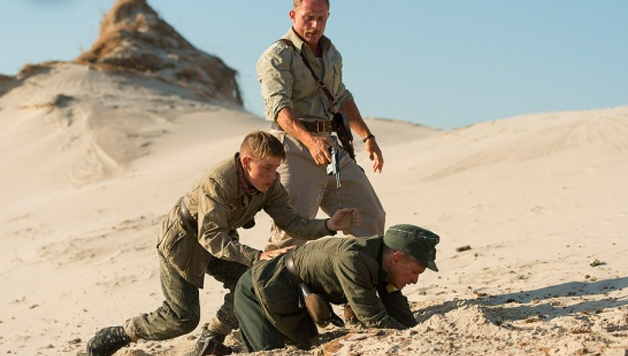 (Under sandet)
Strong themes and violence.

After WW2, German POWs were used to dig up (with their bare hands) and defuse the millions of landmines buried under the beaches of Denmark. It’s a stark historical fact, but not without some complex ethical implications given the enormity of what the Nazis had perpetrated. In this particular story, that’s intensified by the German soldiers in question being ingenuous and rather likeable teenage boys, who were forced into the army just before the war ended.

And then there is the Danish soldier who’s been given the task of training, overseeing, and disciplining them. When we first see Sgt. Carl Rasmussen (Roland Moller), he’s viciously bullying and bashing some of his new charges, and – as if this physical behaviour were not self- explanatory enough – he then proceeds to spell out his utter contempt and hatred for them. It’s not revealed whether Rasmussen’s brutality is a product of the war or simply inherent in his personality, but in any case, his apparent contempt for Germans is shared by his fellow Danish (and British) servicemen, not to mention the odd civilian.

What follows is of course often visceral, but there are also subtler and even gentler elements, particularly in the scenes depicting conversations between the boys. These serve both to stave off monotony and to flesh out the characters. The risk of sudden death by explosion creates a constant bedrock of suspense and tension, and has been used as the basis of at least one classic film (The Wages Of Fear) and another excellent one (The Hurt Locker). While Land Of Mine is not in the same league as either of those, it’s gripping, well-acted by all, and a good, strong tale well told. It’s also that uncommon thing: a movie that touches on the theme of redemption without descending into bathos or inanity.