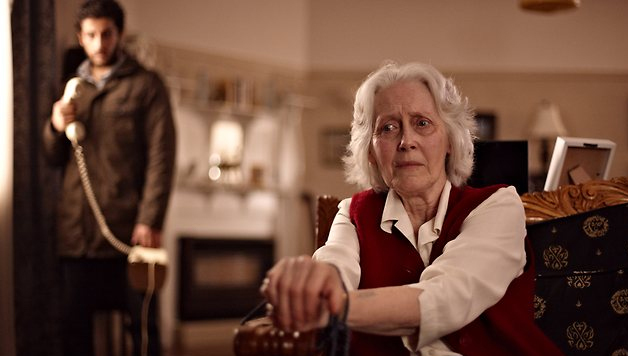 Violence and infrequent coarse language Australia 2012 Director: David Pulbrook Featuring: Julia Blake, Danielle Carter, Nicole Chamoun, Firass Dirani. Running time: 90 minutes Holocaust survivor Ulah Lippmann (Julia Blake) hears of a terrorist attack on a synagogue in her Melbourne neighbourhood. She has no idea she'll soon find herself held hostage by a Muslim radical, Sadiq Mohammad (Firass Dirani), who's on the run after surviving the bombing. Desperately wounded, Sadiq sees Ulah's flat as a place to hide while he plans his next move. So begins a terrifying ordeal that will force Ulah and Sadiq to confront their own pasts - at times driven by mutual need; at times by unexpected revelations; at times by events outside the flat. Fear and hatred turn to sympathy as Ulah takes control, not turning Sadiq in, but nursing him until she discovers his shocking secret. It is the comment of a mother to another woman's son that epitomises the essence of this tense film that addresses the cultural differences that form the world's deepest divides. 'If the world was run by mothers, there would be more sons,' says Jewish Holocaust survivor Ulah to Sadiq. It only takes a few moments in the opening sequence to get a snapshot of Ulah, as she goes about her morning shopping in her Jewish suburb. She clearly has a relationship with the shopkeepers: her butcher jokes that if anyone gets the better of his astute customer, it will be a first. Pulbrook's film (co-scripted with Terence Hammond) slowly and skillfully changes the balance between Ulah and Sadiq. Power and control shifts from the wounded, knife-yielding assailant to the former nurse with the sewing needle as surely as a seesaw wavers from the shifting weight of its two participants. For Ulah there are a few key moments before passing the point of no return; her decision to help Sadiq is far more complex than words can express. Beyond the intimate memories shared with each other from their respective pasts, there is something far more precious that evolves: an understanding that transcends age, gender, nationality and religious beliefs. Original Review: Louise Keller www.urbancinefile.com.au Extracted by Mark Horner.