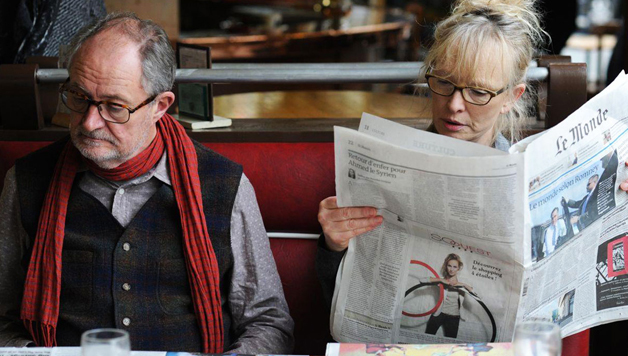 The baby boomers were perhaps the first generation in history where being cool was a legitimate cultural goal. Coolness, youth, and counterculture were all the rage when Nick (Jim Broadbent) met and married Meg (Lindsay Duncan). The British couple, now in their sixties and celebrating their 30th wedding anniversary, try to rekindle some of that youthful adventure with a weekend trip to Paris, where they spent their honeymoon so many years before. Le Week-End marks the fourth collabo-ration between writer Hanif Kureishi and director Roger Michell, and it mines similar territory as their earlier films The Mother (2003) and Venus (2006), which also dealt with the challenges of late-middle/old age. Like these films, Le Week-End is a deceptively provocative and complex portrait of people who vacillate be-tween love and hate, good and bad, weak and strong–sometimes within the same moment. References to the work of Jean-Luc Godard permeate the film, from the title (although Michell is nowhere as self-destructive as Godard’s 1967 film), to the multi-ple allusions to 1964′s Bande à part..

Le Week-End is not a bleak film, but it delves so frequently into uncomfortable truths and very personal injuries, one might begin to wonder why Nick and Meg even bother staying together. There are moments of sweetness between them, just as there are moments of intensity, sexuality, flirtatiousness, intimacy and deeply-felt humour. Broadbent and Duncan bring a terrific lived-in quality to their characters.

At times, Le Week-End plays like the next entry in Richard Linklater’s Before trilogy, but it’s a tribute to the actors, Kureishi and Michell that we don’t need three films to establish such an intimate familiarity.