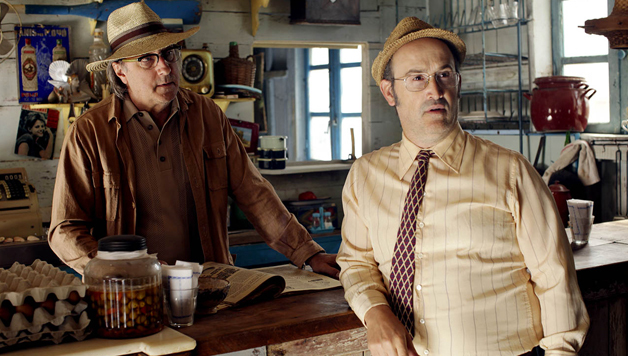 A sex scene, nudity and coarse language Spain 2013 Director: David Truera Featuring: Javier Camara, Natalia de Molina, Francese Colomer Language: Spanish Running Time: 108 minutes 1966, Antonio, who teaches English at a school in a small town in La Mancha, Spain, is obsessed with The Beatles, to the point that he has his class recite the lyrics from "Help!" in English. When he learns that John Lennon is making a Richard Lester film, HOW I WON THE WAR, in Almeria, in the south of the country, he decides to go there to try to meet him. Along the way he picks up a couple of runaways - three months pregnant Belen, who has left a home for unmarried mothers, and Juanjo, who has left home after a fight with his policeman father over his long hair. This terrifically enjoyable film takes its title from the lyrics for "Strawberry Fields Forever", a song John Lennon wrote while he was filming in Spain. It's a comedy, but a comedy with a dark edge that reminds us how life was in Spain back then, under the despotic Franco regime, and how casual violence perpetrated by authority figures on the weak was the order of the day. The ever optimistic Antonio is not to be deterred from his mission while at the same time giving support and friendship to his two young companions, both of whom go through life-changing experiences. The title for this film perfectly describes how the three main characters have been living their lives. This journey isn’t so much a discovery of themselves, but a realization of life around them. It doesn’t change the way they are, but it certainly changes the way they look at things. Original reviews: David Stratton, At the Movies; William Brownridge, Toronto Film scene. Extracted by: Gail Bendall