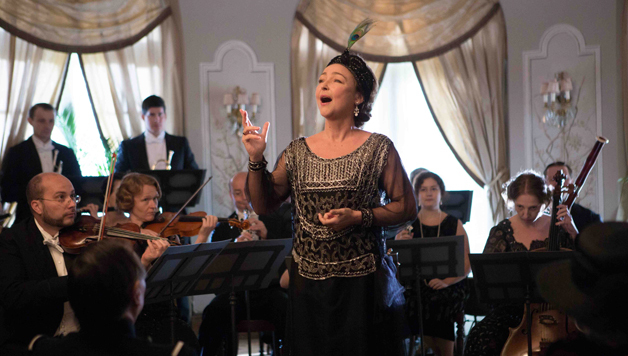 This film was inspired by the life of Florence Foster Jenkins, an American heiress so mad about opera that she deluded herself into thinking she could sing it.

Cunningly avoiding reading her critics, she sustained this belief all her life, courting ridicule by staging a recital at Carnegie Hall at the age of 76.

Marguerite is rich enough to afford a sumptuous chateau on the outskirts of Paris where she lives with her husband, George, and a staff who stuff cotton balls into their ears whenever she practises for the concerts given at the house every month or so. George's inability to tell her the truth about her voice has soured their marriage and he's taken refuge in an affair. She, however, is still in love with him and music has become her consolation for his indifference. Stocked with theatrical memorabilia and filmed in diffused, muted colours, the house is designed as her own personal fairyland where she can dress up in costumes from her favourite operas and dream of seducing audiences with the glories of her voice. Early on, there's a wonderful scene where she sets a chandelier swaying and lies watching its facets dance in the light as she drifts off to sleep.

The story is set in 1921, Paris is becoming home to avant-gardists of all persuasions and Marguerite's wildly off-key performances catch on with some of them although the young critic responsible for her sudden popularity is feeling guilty about it. And well he might. Frot is so effective in offsetting Marguerite's acute self-absorption with sweet-natured guilelessness and generosity that she becomes a figure of great poignancy. It's a performance so finely poised between the comic and the tragic that it's hard to see the craft in it.

Even those most amused by her are touched by her, as well. Others, like her seemingly devoted butler and chauffeur, Madelbos, become more intimately caught up in her fantasy life. He photographs her every performance, poring over the results in his darkroom with an intentness that eventually takes on intimations of something a lot more sinister than loyalty.

Towards the end, the balance tilts from tragedy into melodrama only to recover in the last scene. It's a tale of great sadness – about somebody enchanted by a world she's forever barred from entering.