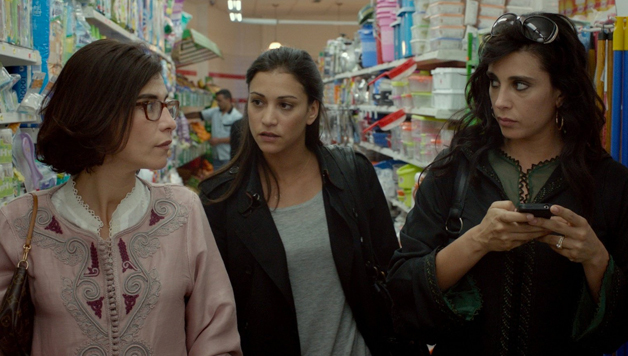 Mature Themes, sexual references & nudity France 2014 Director: Laila Marrakchi Featuring: Morjana Alaoui, Nadine Labaki, Hiam Abbass, Lubna Azabal, Omar Sharif Language: French, Arabic, English with subtitles Running time: 99 minutes We are introduced to the businessman Moulay Hassan, played by one of the most famous Middle Eastern actors of all – the Egyptian legend Omar Sharif, still remarkably spry at the age of 80 or so. Hassan's death launches the story; but in a touch of magic realism, he appears as a ghost, chatting directly to the viewer. At a palatial villa in Tangiers, family members gather for Hassan's wake, including his three contrasting daughters. Miriam is loud, bored and preoccupied with plastic surgery; Kenza, the middle child, is uptight and smug about her marriage; and Sofia, the youngest and most sympathetic, has found success in Hollywood, even if she usually plays terrorists. The film becomes a symposium on the place of women in the Middle East, aiming to counteract stereotypes via Miriam's brashness, Kenza's obstinacy and Sofia's freedom of spirit. Even at this time of mourning, the three are not at all constrained by traditional notions of modesty, drinking a good deal – Heineken must have paid something for product placement – and having intimate discussions in a supermarket to the embarrassment of the cashier. Their mother Aicha is relatively conservative, but neither a fool nor a pushover. A degree of feminist anger is implicit as comedy gives way to melodrama, but ultimately critique is swallowed up in the affirmation of life as an eternal cycle in which joy and sorrow are bound together. We learn that Hassan's choices led to awful consequences, but he's such a pleasant ghost no one could hold this against him. As Bing and Bob sang: "Like Webster's dictionary, we're Morocco-bound." Original review: Jake Wilson, Sydney Morning Herald Extracted by: Janez Zagoda