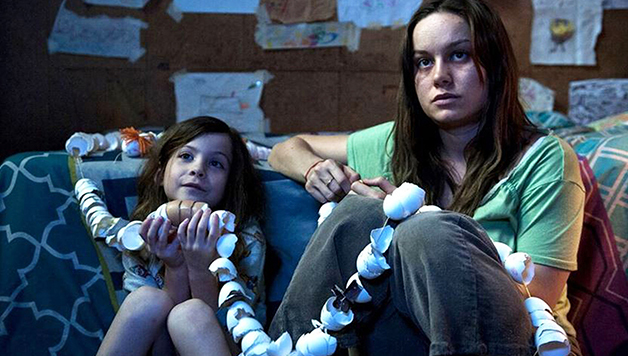 After five-year-old Jack and his mother escape from the enclosed surroundings that Jack has known his entire life, the boy makes a thrilling discovery: the outside world.

Lenny Abrahamson's Room opens in a 10 x 10 room that has no windows, a locked door, and no light other than that provided by an overhead skylight. Jack (Jacob Tremblay), a slight five-year old boy with hair down to his shoulders wakes up each morning as he has all his life, saying hello to his world.

Ma, (Brie Larson) is with him and their endless days consist of cooking, reading, and watching TV where Jack is told that what he sees on the screen is not real, only pretend. All he knows of the world is what he sees in front of his eyes. Old Nick (Sean Bridgers) brings food and other household items but when he comes, Jack has to hide in his wardrobe, out of sight. Ma, we find out, has been kept prisoner and used for sex by the hulking man who comes every night and we know that Jack is a result of his mother's rape. Jack is the focus of the film and we see everything from his point of view, with the help of his sometime narration but we can also get into his mother's mind and feel her pain and live her dreams.

There is never any doubt of his mother's love though the obvious strain of keeping herself from crying out every minute is painfully obvious. To Jack, she is the centre of his world and his reason for being. When the second half of the film takes a surprising turn and shifts 180 degrees, Jack and Ma are not prepared for what awaits them. Even when an alternative is suggested as possible, he doesn't want to hear anything about a different world with blue sky and rivers and trees. Room is a tense and compelling film in which Brie Larson more than fulfills the brilliance that she showed in Short Term 12 and should make her an Oscar contender. Tremblay is also superb.