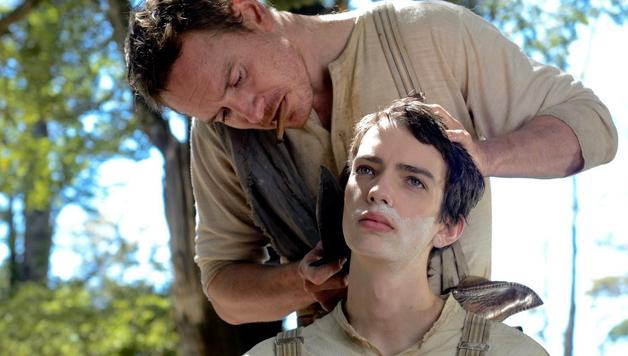 Slow West is the latest film to reinvent a genre that has died off more times than John Wayne. Here’s a period American western featuring a quartet of actors playing 2 Scots, an Irish Canadian and an American all shot in New Zealand.

The story is about an American frontiersman and bounty hunter, cigar smoking Silas, who acts as the film’s narrator and chaperone for Jay Cavendish, a naive 16 year old stargazer and fish out of water (and virgin, to boot) heading to Colorado to be with Rose Ross, the woman he loves. “A jackrabbit in a den of wolves” Silas intones just before their paths meet.

It’s 1870 and Rose and her father have a $2,000 price on their wanted- dead- or- alive heads. Others are on their trail including Payne, a conniving bounty hunter with a band of thieves in search of its next reward but Jay is convinced he’ll find them and all will be well. It is amazing he has survived thus far and inevitable he should put his faith in the services of Silas. In a series of fast moving scenes, Jay, wandering through the wood, is confronted first by a fleeing Native American, then by three of his pursuers, “injun slayers”. “I’m the son of Lady Cavendish” he tentatively introduces himself”. “We’re all sons of bitches”, a killer grunts before Silas ruthlessly intervenes. Silas says little and cares less but he seems trustworthy in his declared intention to keep Jay alive until he finds Rose.

It may sound bleak but the poetic screenplay ensures it crackles with dry wit and humanity and Jay’s character ensures the coldest moment is warmed by his deep reserves of hope. Flashbacks are used skillfully to reveal the bigger picture. Fassbender, as Silas, brings a wry, laidback presence to the role of a lonely drifter forced to acknowledge that there’s more to life than mere survival. Slow West is crafted with tender, loving care and unfolds to a great soundtrack. It is totally captivating.