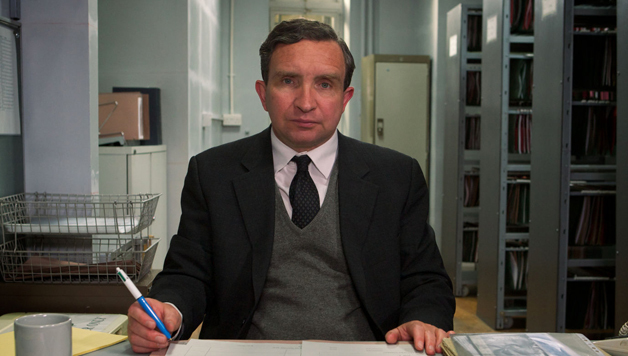 Mature themes and coarse language Italy/UK 2013 Director: Uberto Pasolini Featuring: Eddie Marsan, Joanne Froggatt, Karen Drury, Andrew Buchan, Neil D'Souza, David Shaw Parker Running time: 92 minutes We're letting you go. Is there a nastier phrase in modern management speak? He cannot believe it. Mr May has been with a London council for 22 years. His job is to make the necessary arrangements for people who die alone in the borough. He takes the work seriously: in fact, it's a vocation. He may be a quiet middle-aged man in an increasingly brutal world, but he can do one thing to resist the tide. He can send the dead on their way with dignity. He tries his hardest to reconnect them to the living, the friends and relatives, before each funeral, but many of them don’t want to know. Sometimes he is the only mourner, and he brings music to suit each of his clients, based on what he has been able to learn about them. In fact, that's part of why the council wants to "let him go" – he authorises too many funerals, when cremations are cheaper. The dead don't care, says his boss. Mr May has an extraordinary humanity, matched only by his heroic modesty. He looks like any other grey bureaucrat. He eats the same dinner each night: a can of tuna, a piece of toast and an apple. Mr May is careful, unassuming, shy, gentle – perfectly suited to his delicate work. Stoke, an alcoholic with a prison record, becomes Mr May’s last case and requires a special effort. Still Life has the sort of quiet poise that has all but disappeared from modern movies. It’s an old-fashioned film in a good way – almost like an Ealing comedy, the kind of role that Alec Guinness might have played so well. Original review: Paul Byrnes – Sydney Morning Herald Extracted by Peter Gillard