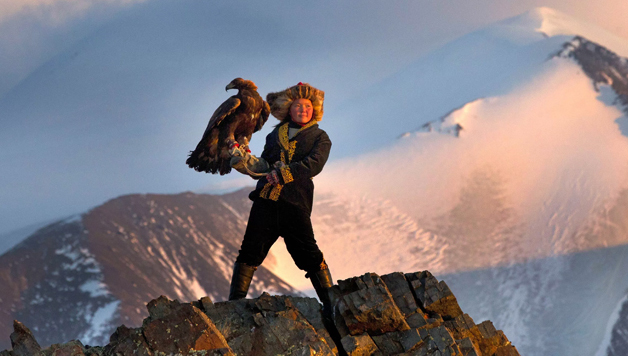 Eagle hunting, a centuries-old tradition, is currently practised by Kazakhs in Bayon-Ölgii, Mongolia, as well as in Kazakhstan, and the Saur and Altai ranges in Xinjiang, China. This ancient form of hunting is also employed in Kyrgyzstan and Akqi, Xinjiang in western China. Golden eagles, capable of speeds of up to 190 miles per hour, weigh up to 15 pounds and average about three feet tall with wings that span over six feet. They kill with their talons, sharp and powerful enough to pulverise the bones of their prey, which is then used by their owners for meat and fur.

This documentary follows apple-cheeked, 13-year-old Aisholpan, a member of a tribe of Kazakh semi-nomads, as she learns the art of eagle hunting from her father Nurgaiv. She is destined to become a member of her family’s 12th generation of hunters. While Nurgaiv and his wife believe in the equality of sexes, many of the tribal elders are vehemently opposed to the training of female hunters.
Aisholpan divides her time between boarding school and her family’s encampment. Under the tutelage of her patient and loving father, Aisholpan will capture her own three-month-old eaglet, which must be female, due to a larger body and more ferocious nature. Despite her age and relative inexperience, Aisholpan enters the Golden Eagle Festival in Olgii to compete against 70 of the greatest eagle hunters––as old as 80––in Mongolia. This and other arduous challenges in the frigid mountains must be endured before Aisholpan can take her place as the youngest and one of the first eagle huntresses.

The Eagle Festival is another of the movie’s highpoints. Eagle-hunting regalia for hunters and their horses are judged, as well as the skill of the eagles at hunting and locating their owners from a distance.

The Eagle Huntress dazzles as much for its images as for the love and respect it holds for its subjects.