The Man Who Knew Infinity (PG) 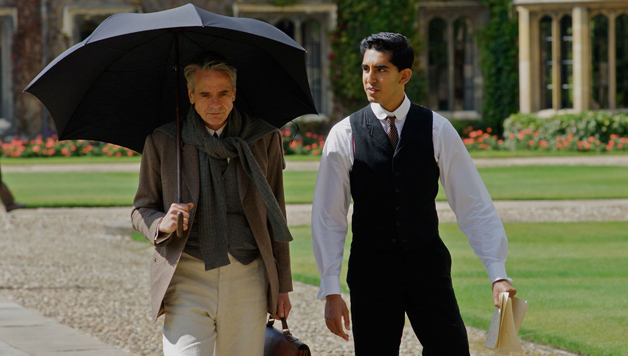 Growing up poor in the Madras of colonial India in the early 1900s self-taught maths genius, Ramanujan earns admittance to Cambridge University during WWI, where he becomes a pioneer in mathematical theories with the guidance of his eccentric professor, G.H. Hardy while at the same time fighting prejudice. It's a great story, so far untold on screen, and portrays the way his experience defied his circumstances and the social culture of the era.

Adapted from Robert Kanigel's biography, the film begins and ends in Madras, as did Ramanujan's life. Dev Patel is a brilliant choice, especially playing opposite Jeremy Irons as his mentor at Cambridge, Professor Hardy a man his total opposite emotionally and spiritually. Where Ramanujan is deeply religious and believes his intuitive and remarkable solutions to mathematical mysteries come direct from his god, Hardy is an atheist. Where Ramanujan is quite an emotional and impulsive character, Hardy is measured, reticent and meticulous. Yet they grow to be the closest of friends. It is in the development of this friendship that the film excels and makes us care for them both. His determination was sometimes mistaken for ego and this is well portrayed in Matt Brown's film.

There is a moving performance of newcomer Devika Bhise as Janaki, Ramanujan's pretty young wife, who is left behind with his mother when he goes to fulfil his destiny. There are heartbreaking moments when letters between the couple fail to reach their destination, prompting emotional misunderstandings about the relationship. Toby Jones is excellent as another great mathematician at Cambridge. John Littlewood and Britain's finest make brief but welcome appearances: Stephen Fry as snooty Sir Francis Spring and Jeremy Northam as the (not yet great) Bertrand Russell.

The various elements of the film - screenplay, direction, music, design, editing, cinematography - are all competent and effective, but it is the central performances that elevate the film to something of lasting value.