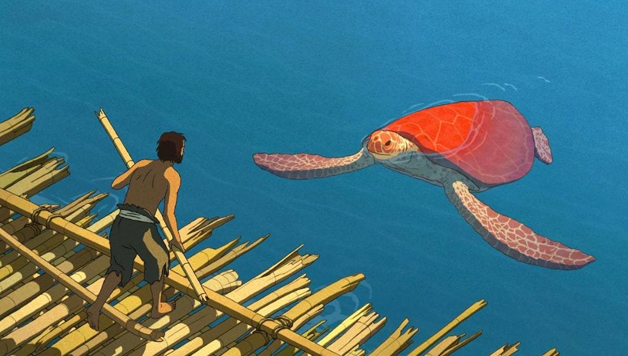 Lost in the middle of the ocean is a man who washes ashore upon an isolated island; he explores his new surroundings and collects fallen bamboo stalks to build a raft. As the protagonist sets sail, the makeshift vessel is destroyed by a mysterious force hidden beneath the water. This is not a one-time occurrence as multiple rafts are destroyed. It is eventually revealed that the source of the destruction is an imposing red turtle. The aquatic creature later has another encounter in a different setting with the frustrated castaway which has some rather surprising results.

What is remarkable is the stripped down imagery which relies more on texturing than detailed drawings. Wide shots are used prominently to emphasise how small the main character is compared to the environment. Nuances are plentiful from the playful and mischievous sea crabs to the underwater ballet that occurs between the sea life and a human being. A cool effect is the creation of the sea foam and the massive tidal wave. The characters are coloured in broad strokes with the exception of the antagonist which is ornamental in design.

It is a daring proposition to create a film that relies on physical gestures and the occasional shout for the 80 minute theatrical running time but to the credit of filmmaker Michael Dudok de Wit, the lack of dialogue adds to the intrigue and mystique. Naturalism overrules surrealistic depictions though there are dream sequences which are pure Studio Ghibli (Ponyo, Howl’s Moving Castle) when it comes to imagination and execution. Other trademarks of Studio Ghibli such as spiritualism and environmentalism are also present. There are moments of suspense that breakup the prevailing serene atmosphere. Overall, The Red Turtle is a beauty to behold.