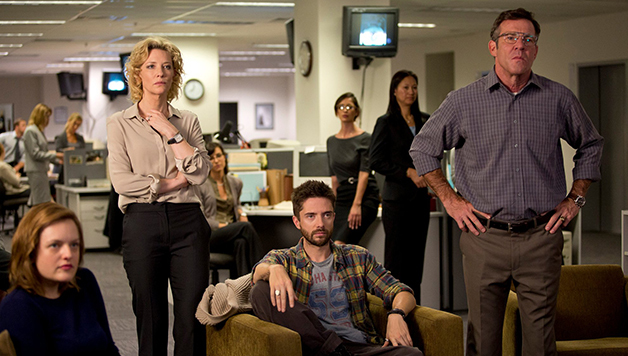 An icon playing an icon – Robert Redford portrays Dan Rather as he becomes embroiled in the journalistic snafu that would end his enviable career. In 2000, Mary Mapes was about to break the story of George Bush’s spotty military career. You may remember the highlights: that he pulled strings to be admitted to the National Guard in order to avoid service in Vietnam, then went AWOL and never really completed even that much. It was going to be a big deal in an election ultimately decided by just 500-odd votes, but that summer, Mapes’ mother died and the story never aired.

Four years later, though, the story is revived when someone comes forward with documents. Mapes and her team bust it wide open after a lot of teasing and research and legwork, and Dan Rather presents the case on 60 Minutes. But of course Republicans were never going to let this story sit, and pretty soon the internet trolls are working feverishly to discredit whatever they can. Truth becomes not just a story about journalism, but about government corruption at the highest level.

60 Minutes is on CBS. CBS was owned by Viacom, a conglomerate that relied on government tax breaks. Can they afford to upset the presidency? Although the events are public knowledge, Truth’s account maintains a certain level of suspense, depicting both the somewhat frantic search for the evidence about Bush’s past, and then the unravelling of the investigative scoop as all the attention is shifted away from the content of the story itself. Mapes' story is never disproved nor the documents impeached, but nor could she guarantee their authenticity without having access to the originals.

Truth, the actual truth, gets lost somewhere in the shuffle.