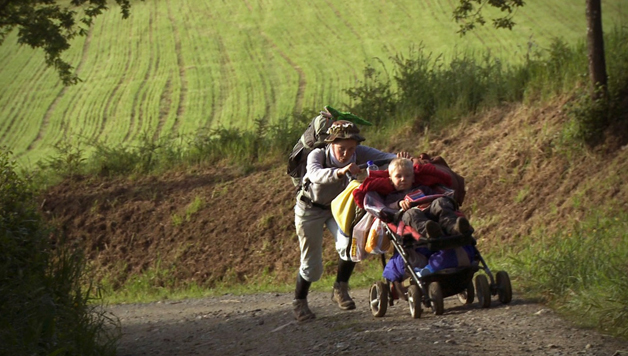 A profile of six pilgrims taking the Camino de Santiago pilgrimage. The journey was first made in the 9th century by pilgrims going to the cathedral of Santiago de Compostela in Spain, where the bones of St James are said to be buried. There is a network of trails to Santiago, followed on foot by hundreds of thousands every year; the routes have been the subject of films, documentaries, books and TV series.

Smith focuses on six sets of travellers, although we meet others along the way. The oldest are Wayne and Jack, from Canada. Wayne's wife died four years earlier, and his eyes fill with tears when he speaks of her. The previous year, he made a pilgrimage in Japan with his son, in honour of his wife; on the Camino, he has come with an old friend, Jack, a priest in his early 70s.

The youngest is Cyrian, a three-year-old French boy who is with his mother, Tatiana, and her brother, Alexis. When Alexis is looking after her son, Tatiana likes to walk alone and pray. Cyrian is quick and mobile, and his mother sometimes loses track of him briefly, but it's her relationship with her brother that causes her the most stress; she thinks he's too much of a party boy for the Camino.

Some walkers are there almost by chance. Tomas, an amiable Portuguese guy, says he wasn't quite sure what to do after he left his job; he wavered between kite surfing and the Camino, but walking won out.

It's not hard to see the appeal of the Camino, in its simplicity and potential — even if Smith's film can depict only aspects of the experience, and isn't able to explore its after-effects.