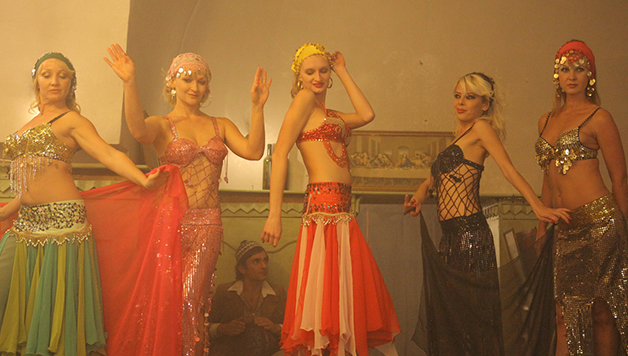 Peace in the Middle East would come about more easily if the region were governed by women. After relegating women to inferior or invisible roles in society, many of the region's nations are governed by men who want to prove how macho they are. Nadine Labaki's film is an intriguing comedy in which the women of a tiny, isolated Lebanese village conspire to bring about peace.

The film opens with yet another procession of women dressed in black. They're going to the town cemetery, which has separate sections for Muslim and Christian corpses, as if it makes a difference. They clean tombstones, polish marble, pull weeds, plant flowers and caress the faded photos of their loved ones that have been mounted in tacky frames. Too many of their men have died for stupid reasons. "Do you think we exist simply to mourn you?" one women shouts at a group of men who are worked up.

Now these women decide to take steps to trick their men into calming down and living peacefully side by side. Led by Amale, a Christian who is secretly in love with a Moslem man. They know their men, their strengths and weaknesses., especially their weaknesses At the café they manage get the men giggling together by feeding them hashish brownies. And they import a bus load of Ukrainian strip dancers who turn out to be jolly good sports and inspire the men to realize how much they have in common with each other. The local women are safe from detection, because who would dream they could be capable of such a thing? Good feelings spread in the village, and tempers cool somewhat.