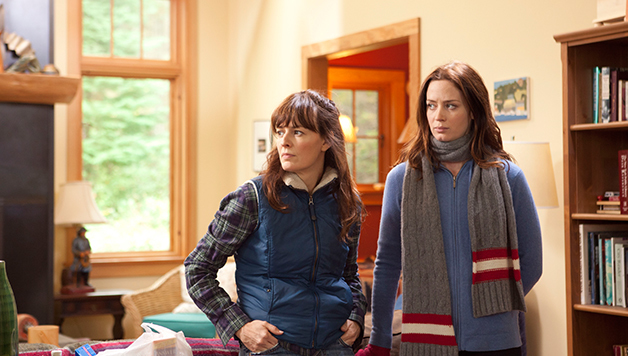 Sex scene, sexual references frequent coarse language USA 2011 Written and directed by: Lunn Shelton Featuring: Featuring: Mark Duplass, Emily Blunt, Rosemary Dewitt Running time: 90 minutes MARGARET: Your Sister's sister begins with a commemorative get-together for Tom who died a year before. His friends reminisce fondly but his brother Jack adds a more acerbic note to proceedings. Tom's former girlfriend Iris is best friends with Jack and suggests he needs time to himself, offering her family holiday home on an island off Washington State. On arrival Jack is totally taken aback to find Iris' half-sister Hannah in residence. Over a bottle of tequila they find an understanding. When Iris arrives unexpectedly Jack is nervous about her knowing anything about his intimacy with Hannah. There is such a lovely honesty to this film and it comes from the performances, the dialogue I believe was partly improvised. Mark Duplass is just marvellous in this, vulnerable, natural, funny. Emily Blunt is also gorgeous, but it's Rosemary DeWitt's performance that just soars, it is so beautifully nuanced. It has one of the best getting drunk scenes of recent memory, it has a brilliant breakfast scene but it is the way Shelton approaches convoluted relationships that ultimately resonates. DAVID: The dialogue is so natural. As you say, semi-improvised and the three performances - it's basically a three-hander. The three performances are so consummate. They're just beautiful. I always love Emily Blunt. She's terrific but Mark Duplass and Rosemary Dewitt are just wonderful too. That scene between the two of them where they meet and get drunk on tequila and just talk and talk and talk, it's marvellous. It's just a marvellous scene. Original Review: Margaret Pomeranz and David Stratton – At the Movies (ABC TV) Extracted by Gail Bendall.