“As a child, as soon as I could read and write, I wrote short stories and plays,” the Brisbane-born writer-director Jennifer Kent says. “I was about seven when I put on my first play: wrote, directed and acted in it. This was a natural desire for me, a compulsion. I did it until I auditioned for [Sydney drama school] NIDA."

Kent began her career as an actress primarily in television. She was a main cast member of Murder Call, from creator Hal McElroy, playing Constable Dee Suzeraine in all 31 episodes of the series. She also appeared in several episodes of other Australian TV series such as All Saints, Police Rescue and Above the Law.

Having been an acting teacher for 13 years at major institutions such as NIDA, Kent was inspired after seeing Dancer in the Dark to pursue a career as a filmmaker. She wrote to the film’s director, Lars von Trier, asking to study under him. In 2002 von Trier allowed her to assist him as part of a directing attachment on the set of his film Dogville (LFS 2004) starring Nicole Kidman. In 2006 Kent directed an episode of Two Twisted, an Australian series following in the tradition of The Twilight Zone.

It was her first feature-length film The Babadook that played in the 2014 Sundance Film Festival that confirmed her path in film directing.  She was sent a pile of scripts to consider, including Hollywood comic-book movies, after The Babadook was acclaimed internationally as one of the freshest horror films.  Some of these US scripts appealed both creatively and financially, but Kent rejected all of them to write and direct a film she wanted to call The Nightingale – as in a woman who sings finding her voice on another level – even before she had worked out the story.  "I really have to feel very deeply about the theme and the thread of a story to want to go the whole distance with it. Filmmaking is a very gruelling and taxing process and it takes your life away.  If I'm going to do that, I want to make sure that the story I'm telling is really something I can stand behind. And often things looked appealing, but they didn't have that central story that gave me that devotion.”

'I've turned down millions': Jennifer Kent on making an epic revenge tale
Wikipedia
The Babadook: 'I was screaming all day' 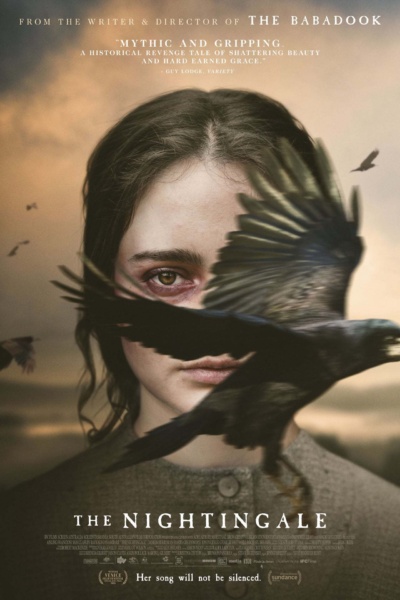