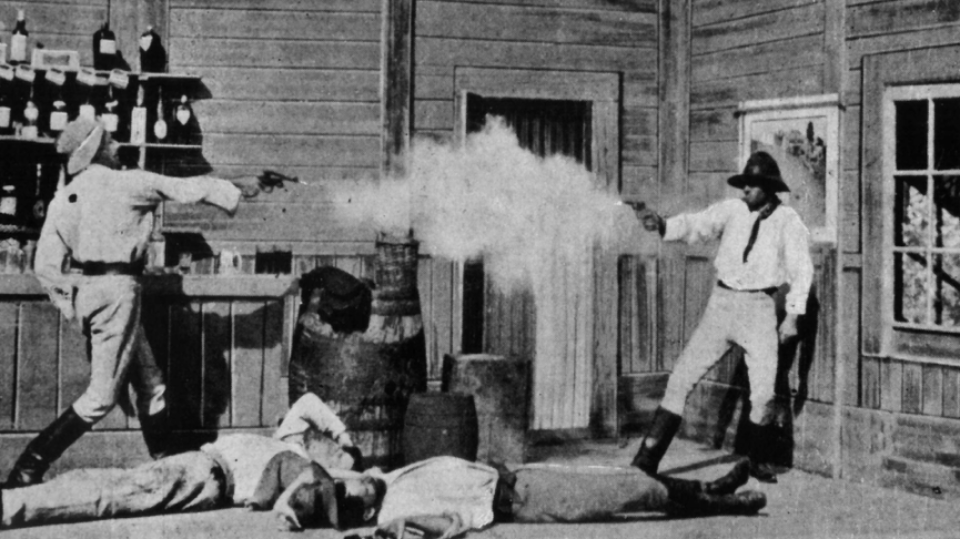 A little known fact is that the Australian made film, The Story of the Kelly Gang, is regarded as the world’s first feature length movie.

When it opened in Melbourne, Boxing Day 1906, people had little concept of the role moving pictures would have in our lives, on our culture and on our understanding of the world.

The film ran for seven weeks in Melbourne then toured various parts of the country earning a colossal £25,000 for its financiers. A happy return considering its cost was an estimated £1,000. The following year it toured New Zealand and England.

Financial success it may have been, but it was not without controversy. After having watched the film, five children in Ballarat broke ‘into a photographic studio to steal money, after which they bailed up a group of schoolchildren at gunpoint’.  The film was also banned from Kelly country: Benalla and Wangaratta.

The sounds for the film came from behind the screen: actors performed the dialogue, sound effects such as hoof beats and gunshots were mimicked.  Like many other films of its day, The Story of the Kelly Gang was filmed mostly in wide shot, duplicating the perspective that audiences were accustomed to from live theatre.

The Story of the Kelly Gang was produced by brothers John, Frank and Nevin Tait, who were concert promotors in Melbourne, in combination with Millard Johnson and William Gibson. Another Tait brother, Charles, both directed and acted in the film, along with his wife Kate. Over 30 people are believed to have appeared in the film, each paid £1 a day.